Foods to Help You Lose Weight. 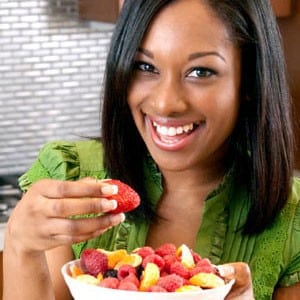 Being overweight could come with lots health complications such as high blood pressure, diabetes, heart disease and stroke, gout, breathing troubles such as sleep apnea etc. Overweight could be cut down through proper dieting. Here are some few foods that can help you lose weight.

You’ve probably never heard of cholecystokinin, but it’s one of your best weight-loss pals. This digestive hormone is a natural appetite suppressant. So how do you get more cholecystokinin? One way, report researchers at the University of California at Davis, is by eating beans: A study of eight men found that their levels of the hormone (which may work by keeping food in your stomach longer) were twice as high after a meal containing beans than after a low-fiber meal containing rice and dry milk.

Do you tend to stuff yourself at meals? Control that calorie intake by starting with a large salad (but hold the creamy dressing.) A study published in the Journal of the American Dietetic Association found that people who ate one salad a day with dressing had higher levels of vitamins C and E, folic acid, lycopene, and carotenoids-all disease fighters-than those who didn’t add salad to their daily menu.

The slimming ingredient isn’t caffeine. Antioxidants called catechins are what help speed metabolism and fat burning. In a recent Japanese study, 35 men who drank a bottle of oolong tea mixed with green tea catechins lost weight, boosted their metabolism, and had a significant drop in their body mass index. Health bonus: The participants also lowered their (bad) LDL cholesterol.

Fight off middle-age pounds with extra virgin olive oil. A monounsaturated fat, it’ll help you burn calories. In an Australian study, 12 postmenopausal women (ages 57 to 73) were given a breakfast cereal dressed either with a mixture of cream and skim milk or half an ounce of olive oil and skim milk. The women who ate the oil-laced muesli boosted their metabolism.

It’s back! A  2006 study of 91 obese people conducted at the Nutrition and Metabolic Research Center at Scripps Clinic found that eating half a grapefruit before each meal or drinking a serving of the juice three times a day helped people drop more than three pounds over 12 weeks. The fruit’s phytochemicals reduce insulin levels, a process that may force your body to convert calories into energy rather than flab.